This is a full review of Sungkyun Korean 1 Vocabulary · Grammar. I went through the whole textbook, first page to last, so now you can compare my final verdict with my first impression of it.

There is also another volume of Sungkyun Korean 1 subtitled Listening · Speaking · Reading · Writing, but I only got the Vocabulary · Grammar one.

This book is designed for classroom use, possibly for Korean language classes at Sungkyunkwan University, so I can’t recommend it for self-studying even though I studied from it on my own.

Textbook, notebook, pen, and bed. What else does one need in life?

Here is the table of contents. I will go more in-depth about the structure of the textbook below.

I bought this textbook as soon as it was published, just a few months ago, when there were no reviews online to tell me what to expect (I explained before why I got it).

So, what happens when you get a textbook without reading any reviews?

Using it has been a rollercoaster ride.

Right at the very beginning an unforgivable typo made me think this is going to be a disaster of a book. Introduction in bad English made me doubt its quality.

Then slowly over time the textbook proved itself to be much better than I initially expected, teaching me a lot, only to plunge me into depths of despair every now and then.

Here is an example of the issues I had with English translation, taken right from the very beginning of the book. 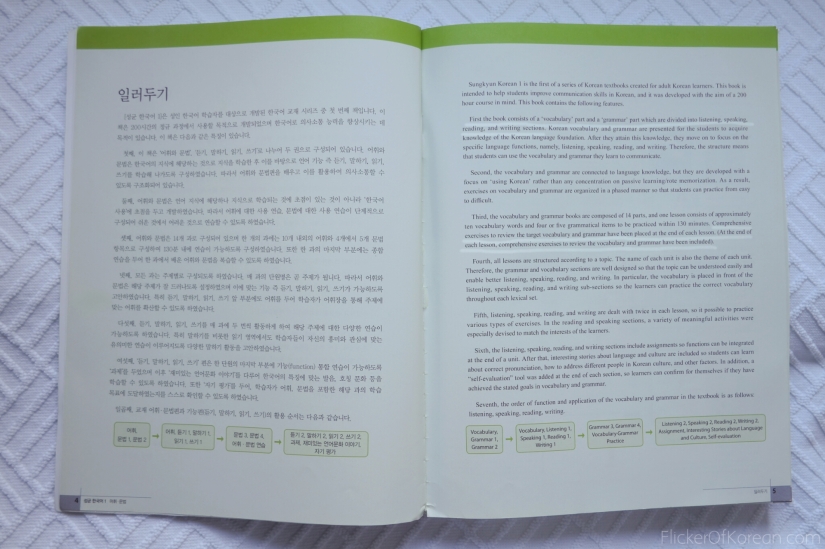 I highlighted slightly some of the offending sentences.

Now, my Korean is far from good, but I’m pretty sure that the first sentence in the second paragraph, starting with “첫째, 이 책은…” is talking about the two volumes I mentioned previously, “Vocabulary · Grammar” being the one I have and “Listening · Speaking · Reading · Writing” being the one I don’t. Yet the translation makes it seem like this book itself is divided into listening, speaking, reading and writing sections. It is not.

The second highlight, in the fourth paragraph, is the exact same sentence written in two slightly different ways. I am assuming translator presented both options expecting someone would choose but instead they just printed it as they received it.

It just leaves an impression of sloppiness.

Right after that, the typo.

Auto-correct? Attempt to write it as it is pronounced? I really have no idea.

To make the mistake even more awkward the subtitle “The creation of Hangul” is right underneath it, with Hangul spelled properly, and the translation of the Korean text underneath mentions Hangul about a dozen times.

Luckily, on subsequent pages things started to look up. Quite a bit.

The section that teaches Hangul (pardon, Hangle) is the best I’ve seen in an integrated Korean textbook that isn’t specialized to just teaching Korean pronunciation.

Unfortunately, the issues with the translation continue, such as telling the readers that depending on their shape consonants and vowels are sometimes placed “upside down” (it should be “one above the other” I presume).

Still, the Korean part, the block graphics showing how each syllable is formed, the usage of IPA instead of Romanization, the different illustrations showing both where the sound is produced in the mouth on the inside and the position of lips and teeth from the outside, the writing and listening exercises, and the inclusion of Korean alphabetical order, made this my favorite Hangul lessons I’ve come across.

Granted, I already knew Hangul so it’s difficult to look at it the way a complete beginner would see it, but I honestly do think it’s an excellent introduction to Hangul.

All of this goes on for about 30 pages and then the rest of the 280 pages are vocabulary and grammar lessons, and practice tests. SungKyun Korean 1 Vocabulary · Grammar is a thick textbook, larger in format and covering more ground than other Korean beginner textbooks I have used.

It comes with an audio CD, although there is very little audio content once the book finishes with Hangul. I assume most of the audio is reserved for the other volume judging by the Listening in the subheading.

This book is divided into two major sections, with each section concluding with a test reminiscent of TOPIK. There are 14 chapters in total, so 7 chapters in each section. You can see this in the table of contents in the photo above.

Answer key is included in the back of the book.

Each chapter starts with vocabulary lesson titled 어휘, and the rest of the lessons cover one grammar point each.

Vocabulary lesson, one at the beginning of each of the 14 chapters, introduces new vocabulary and expressions and then several types of exercises. One of those is usually a listening exercise and this is the only place in the chapter accompanied with audio.

There are no English translations for the vocabulary so you have to look it up yourself.

I really like the look and the layout of the grammar lessons. Everything is always in the same place, laid out in the same way, so it’s easy to find what you need. Every separate element is clearly marked, with enough space in between, and it manages to be colorful yet muted enough not to overwhelm my senses. And I get overwhelmed really easily.

Each lesson is structured as follows:

Any extra new vocabulary or additional info about the grammar point are clearly marked in little rectangles in the margins.

Grammar lessons don’t have any audio.

Lack of English translation for vocabulary, sample sentences, and additional grammar points, as well as the requirement of having classmates to do some exercises, point to this being a classroom textbook and not meant for studying on your own. I could use it for self-studying only because I already knew most of it and used it for revision, and also because after all this time I am fairly good at navigating Korean online dictionary and looking up grammar online.

Take for an example the explanation of  -입니다/-입니까.

Very short. Not very clear and it doesn’t even mention that one is used as a declarative ending and the other as an interrogative. This is not criticism, as this book does what it was made for – leaves to the lecturer to explain it and uses the space in the textbook so learners have more exercises when they get home. I just caution those who want to use it to self-study.

However, taking all this into account, I actually really enjoyed studying from it. I liked the layout and I really liked the exercises despite the occasional plunge into despair I mentioned at the beginning caused by, you guessed it, English translations. (Oh, and one funny oversight in the stock image they chose.)

“If the verb stem any other endings, and use 해서 for verb with the 하다.” As you can imagine, that’s not what the Korean version above says. At least now you know what it feels like when I get a brain fa…ilure.

I did like the exercises. I didn’t find any mistakes there and the writers are really good at incorporating previously learned grammar. I came across too many textbooks which seem to go through a reset each lesson, perhaps so a student can flip to any page of the textbook and not have to know everything that came before it.

It incrementally builds on previous knowledge, increasing a sense of accomplishment and constantly refreshing previously learned information. Don’t you just hate that sense of failing to progress when you come across a grammar ending you know you learned ten lessons ago but have no idea what it means?

As an example, a simple looking sentence from the book: “어제 영화를 보고 슬퍼서 울었어요” uses object marker, endings -고 and -어서 one right after the other, irregular verb with -ㅡ deletion, and past tense all in one sentence. Being able to understand this is a big deal for a beginner.

After the vocabulary and grammar lessons, at the end of each chapter, is practice titled 어휘, 문법 연습. Two pages of revision exercises. 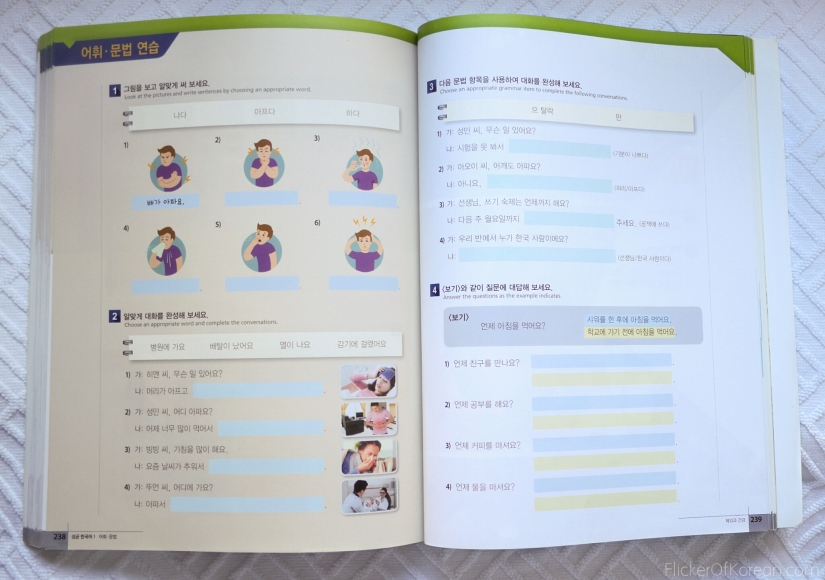 These final exercises are equally good as those in the lessons, but approximately halfway through the book they started incorporating vocabulary in these that hasn’t been previously taught. I found this inconvenient as I wanted to test my knowledge of the previous lessons, without having to go and learn new words first. I was glad to learn some more Korean words, but the end of chapter where you’re wrapping things up seems like a strange place to introduce new vocabulary.

One thing that I wish was different, and this is just a personal preference, is that in the exercises that are in table format for practicing Korean verb conjugations, verbs are always sorted by type into columns. I wish they were mixed up so I had to think which ending to use instead of filling them in automatically (verb endings sometimes have different forms depending if they’re 하다 verbs, action verbs, descriptive verbs/adjectives, ending with vowels or consonants).

And finally, each of the two large sections of the book ends with a test reminiscent of TOPIK.

The answer key for these questions is also included.

All in all, it did have its low points, but it increased my score on mock TOPIK exam and vocabulary tests I took, so I guess going through every single lesson and exercise was worth it.

Sungkyun Korean 1 is obviously made for classroom use, so I can’t really recommend it for self-studying, which is a pity because there are many aspects of it that I really liked and I can tell that many people who worked on it – from those structuring all the exercises to graphic designers – did a good job and put a lot of effort into it.

At more than 280 pages it is one of the most encompassing, if not in-depth, beginner textbooks I’ve seen.

If there is a second edition someday I hope they fix the current English translation issues, translate the rest of the grammar tips, tweak a few things 🔧🔩, and they will have an excellent Korean textbook on their hands.

What’s next for me?

I got SUNGKYUN KOREAN 1 Vocabulary · Grammar almost as soon as it was first published in July 2018. At that time it was the only one published from the series. Now 4 levels are out (2 more on the way I think), each divided into two volumes like the first one.

I almost want to get the second one out of curiosity, but I need a textbook better suited for self-study and hopefully with an English translation that doesn’t make me worry I forgot to take my anti-seizure medication 😂

I saw a lot of other bloggers recommend Ewha textbooks so I got those and will start studying with them tomorrow.