For the first time in my life I tried to read a webtoon in Korean – a language I barely know – as I am too impatient to wait for the translation and too sick to work on my textbook right now. As I went through it I wrote down Korean vocabulary and grammar and decided to share it here, in case anyone would like to join me in the struggle of reading it in Korean.

It is called July Found by Chance (어쩌다 발견한 7월) (<- this is raw Korean version) published by Daum and made by my favorite webtoon author (만화가) known as muryu (무류).

It is beautifully drawn, and has an exciting plot and a type of humor I really enjoy. I decided to try to read it even though I don’t understand 90% of what’s being said (95%?).

I’m not leaving anything for later. I’ve learned my lesson last time. (Refer to my previous post to understand my favorite-webtoon debacle.) 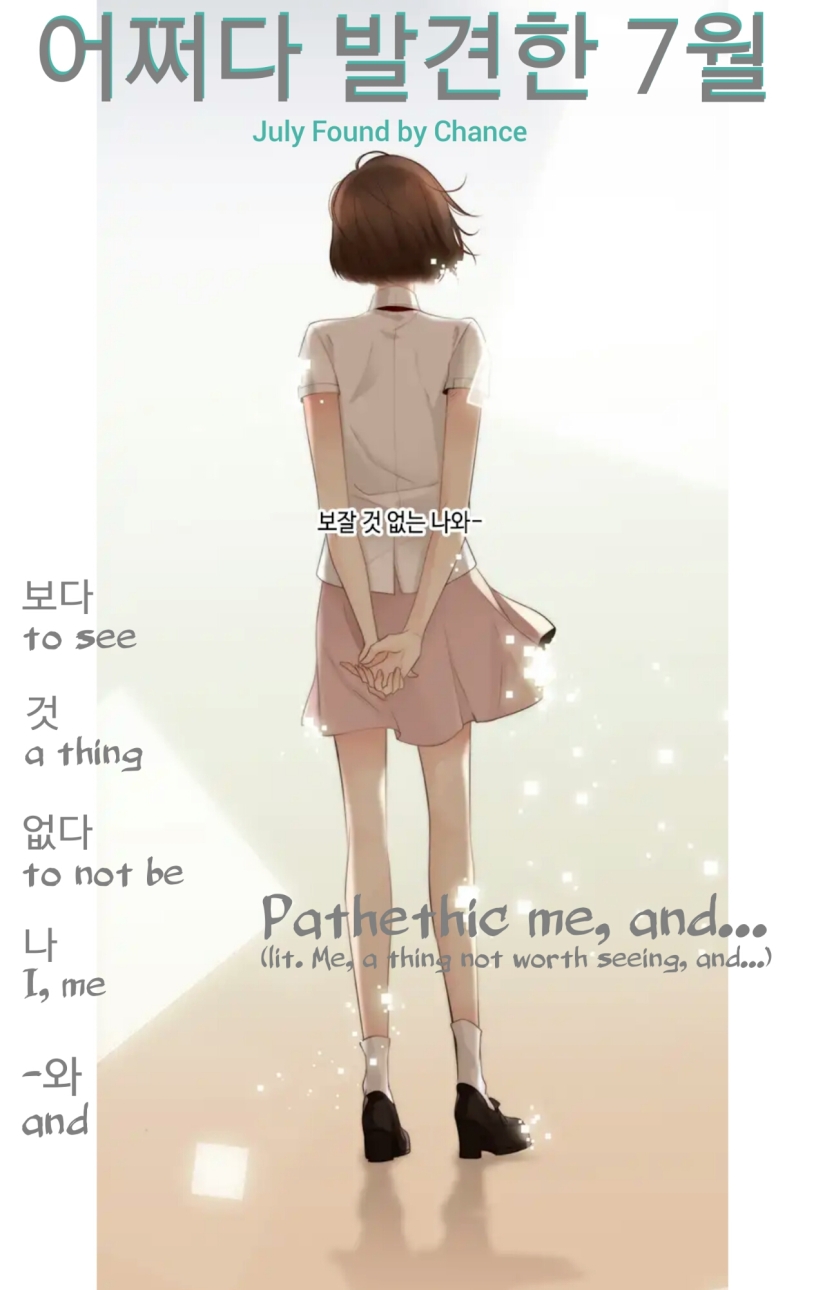 July Found by Chance is a relatively easy webtoon to learn Korean with.

Granted, it’s a regular webtoon written for native speakers – not for Korean language learners, and since the beginning is quite mysterious it takes an episode or two to figure out what’s going on, but other than that it uses quite simple language.

It is set in high school so characters use short and simple sentences. Much shorter than in my beloved historical webtoon that caused the aforementioned debacle, anyway.

While it’s not technically a Korean comic for beginners, I am a beginner and that’s not stopping me. At the very least it doesn’t have long convoluted monologues by court officials emulating historical Korean speech, like a certain other webtoon. (Yep, you guessed it, refer to my previous post about the debacle.)

Another good thing about using this particular webtoon to learn Korean is that it has fantastic re-readability. When I went through it the second time I was able to notice certain details that were meaningless in the first read-through. “Ah, that’s when it started! Of course,” “There they are in the background, finishing their conversation. That’s why the jump happened.”

It makes repeat reading equally enjoyable as the first and, after all, repetition is the mother of learning.

To get right to the main point – Korean grammar and vocabulary from the webtoon – I left talking about how much reading this webtoon improved my Korean for the end, as well as explaining why I approached it differently than I do other sources for learning Korean, so scroll to the bottom of this post for a few final thoughts.

I will not talk about the plot but you might be able to guess certain plot point from sentences I translate, so: Spoiler alert!

If you notice any mistakes let me know (….please help me!). Three question marks “???” signify that I doubt my translation, or that I have no clue how to translate it at all.

Let’s get into webtoon’s vocabulary and grammar.

Here is Korean -> English translation as I read through the webtoon:

Title of the webtoon:

(↳this is not my translation, these are the titles I found it under)

어쩌다
accidentally, by chance
Note: This word looks like a verb or an adjective but doesn’t act like either. What’s up with that?

발견하다
to discover, stumble on, locate

보잘것없다 [보잘꺼덥따] or 보잘 것 없다
worthless, pathetic, meager
Note: More literally: not worth seeing. Refer to the picture above, from the webtoon.

내가 너를 찾을게-
I will find you…

-버리다
indicates that the preceding action was done to completion

그렇게 계속 의심하면 여기서 널 밀어버릴 수도 있어.
If you keep doubting me like that, I could push you off here.

–(으)니까
because, so (speaker gives reason for, and regrets, something not happening)

소중하다 (Hanja: 所重―)
to be precious, valuable, dear
Note: This word occurs frequently throughout this webtoon

일주일 전
a week ago

전혀 (Hanja: 全―)
completely, entirely; not at all, not a bit

걷다
to gather up, bring in; to collect, gather;
Also: to walk

상황 파악이 전혀 안되네.
I don’t understand the situation at all.
Note: I don’t know the ending -네 or how it changes the meaning of the sentence.

와중에
in the middle of something complicated happening

지치다
to be exhausted, be fatigued

체감시간
??? Sense of time, the time your body feels passed

이주화
Joohwa Lee
Note: Name of a male character, who is a doctor.

-ㄴ 것 같아요
-it seems as though
Note: This appears to be a very common Korean sentence ending, I’d better learn it as soon as I have the brain power.

상관없다 [상과넙따] (Hanja: 相關–)
to not care, to not matter, to have nothing to do with

지겹다
to be painfully boring

차이다
to be dumped, broken up with ; to be hit, kicked

눌러 주세요.
Please press (push).
Note: Sign on the doors. Might be useful for anyone having to deal with Korean doors. 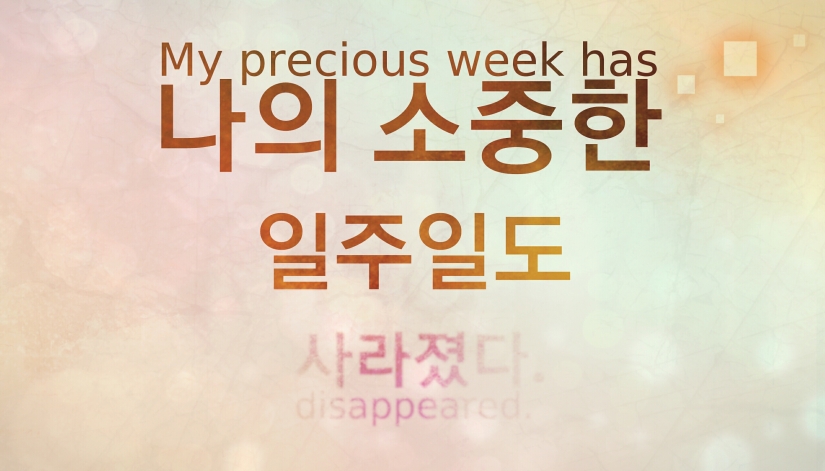 이도화
Dohwa Lee
Note: Name of a male character, who is a second lead.

남조
??? I couldn’t find this one anywhere, but from the context of their conversation I am guessing this is short for 남자 (male) + 조연 (Hanja: 助演) (supporting role), so second male lead.

무엇을 해야 하는지 어느 하나 기억하지 못 했다.
??? I can’t remember one thing I was intending to do.

날 알아봐 주는 건 너 뿐인데.
You’re the only one who recognizes me.

눈치채다
to become aware of, be conscious of, suspect

That’s it for now. I will add more as I go through it again.

시한부 (Hanja: 時限附)
limited in time (such as terminally ill)

This is actually not how I would learn Korean from a webtoon. It was never my intention to. All I wanted is to read through it and understand the story as much as possible, so my approach to it has been vastly different than what I normally do.

I have too many other Korean sources from which I’m doing structured studying anyway.

All of these take months. This was the first time I just tried reading through a webtoon, nothing more. In all honesty, I didn’t expect to learn much, if anything.

My predictions were right. I probably didn’t memorize a single new word.

But something unexpected happened!

Usually, if I’m not actively studying Korean, when I come across a large chunk of Korean text my eyes just glaze over. I know for certain that I won’t understand it, and slowly reading syllable by syllable to check if I can pick out a few words I do understand is just too exhausting for me.

하.지.만 after just three days of forcing myself to read every single word from this webtoon and trying to understand it I could inexplicably scan large chunks of Korean text easily and pick out the words I know at a glance.

I really didn’t expect to see any improvement let alone such a drastic one. I wonder if it’s temporary or if it will last.

So despite not forcing myself to memorize Korean webtoon vocabulary something good did come out of it.

If you would rather read July Found by Chance (어쩌다 발견한 7월) webtoon in an app than on Daum Webtoon site, Daum has webtoon apps for iOS and Android. Unfortunately, unlike Naver, it doesn’t have English version of its app.