You see, I was reading my favorite webtoon[1] of all time, Twelfth Night (십이야), slowly savouring every scene, resisting the urge to binge-read the whole thing in one day, prolonging the experience, enjoying the details, reading only a few episodes per day, when I woke up one morning and…

I. Kid. You. Not. English translation publisher Spottoon lost the licence just as I was smack in the middle of the story.

It’s a “temporary” suspension, they said, as they renegotiate the licences for more than 30 webtoons they lost. I didn’t believe it was temporary then, and I don’t believe it’s temporary now, 6 months later. 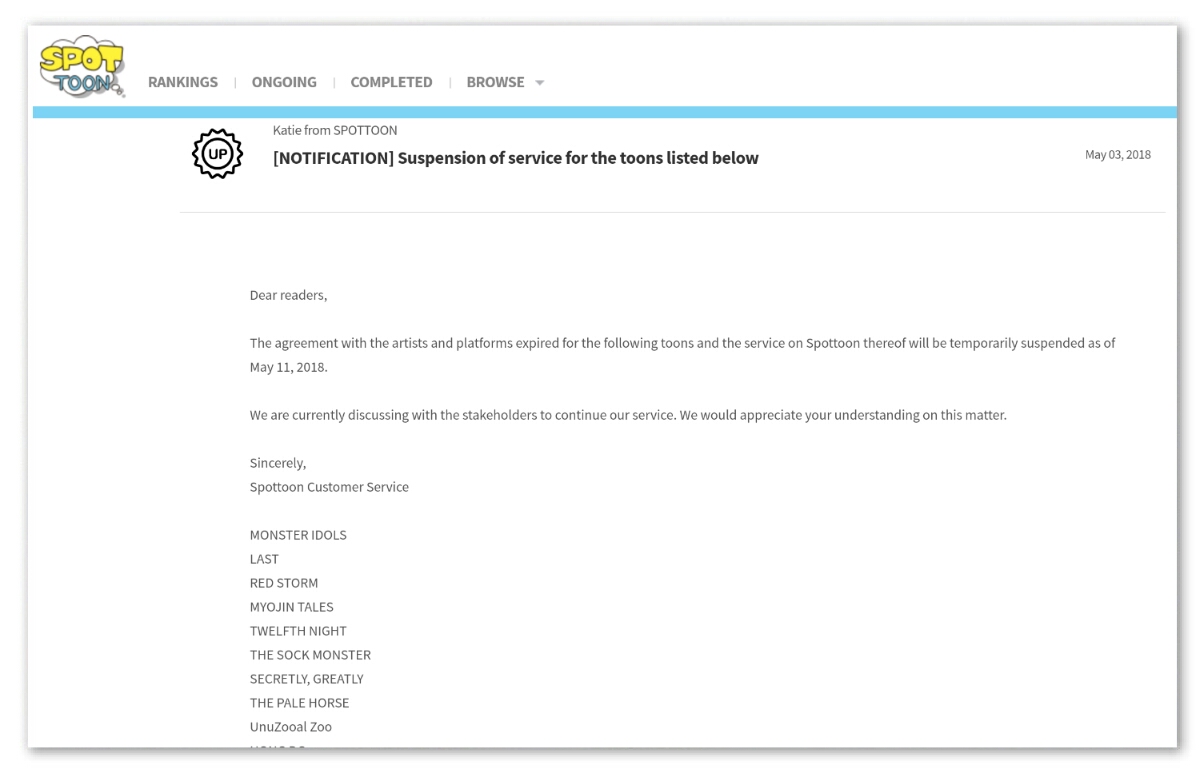 Twelfth Night (십이야), sometimes translated as Twelve Nights, is one of the most exciting webtoons I have ever read, with unexpected twists and turns at every corner. It is also the most beautifully drawn webtoon I have ever seen, and I’ve seen many.

I had to keep reading it. I had to.

For months I scoured the dark corners of the internet, looking for alternate English translation, looking for someone else to pick up the licence, but nope, nothing.

I finally relented and decided that no matter how bad my knowledge of Korean was it was better than not reading it at all. I prepared to slog through Korean account creation and went to read Twelfth Night on Daum in Korean.

But lo and behold, unlike the English version, Korean version wasn’t free.

I really wanted to read it, I only needed the second half as I have read the first, episodes in Korean are fairly cheap, and I should support my favorite author with more than just views and likes anyway. I can pay.

Because Daum requires Korean identification or something called iPin which only those foreigners who are living in Korea can get, and the rest of us…

No! Do you think little details such as the translation disappearing from the face of the Earth, and me not being able to understand Korean, and Korean version being inaccessible to me and everyone I know…… would stop me!?

I found out, don’t ask me how because I can’t remember, that the author muryu (무류) has her blog on Daum.

Ok, now what? No matter, I found her new blog, on Naver.

Couldn’t understand a thing, but Naver dictionary, Google Translate and I got through it and there I found out that her webtoon got published in printed format.

Not good for the planet but, hey, no login required to open a book.

Anyway, in the end I bought it.

Isn’t it stunning? I love the silver foiling where it says 십이야 6, it’s so shiny, and the rest of the cover is made of matte paper which feels wonderful when you run your fingers over it.

To be honest it was pretty cheap when you consider how much ink went into each of these manhwa, with over 350 color pages. They are printed on glossy paper so each weighs almost 2lbs (almost 1kg).

You will find out why the weight is important in a moment.

It is equally beautiful inside. Set in an imaginary world, very similar to Korean Joseon dynasty period, it is full of colorful Hanboks and royal intrigue.

All the trouble was worth it in the end, right? 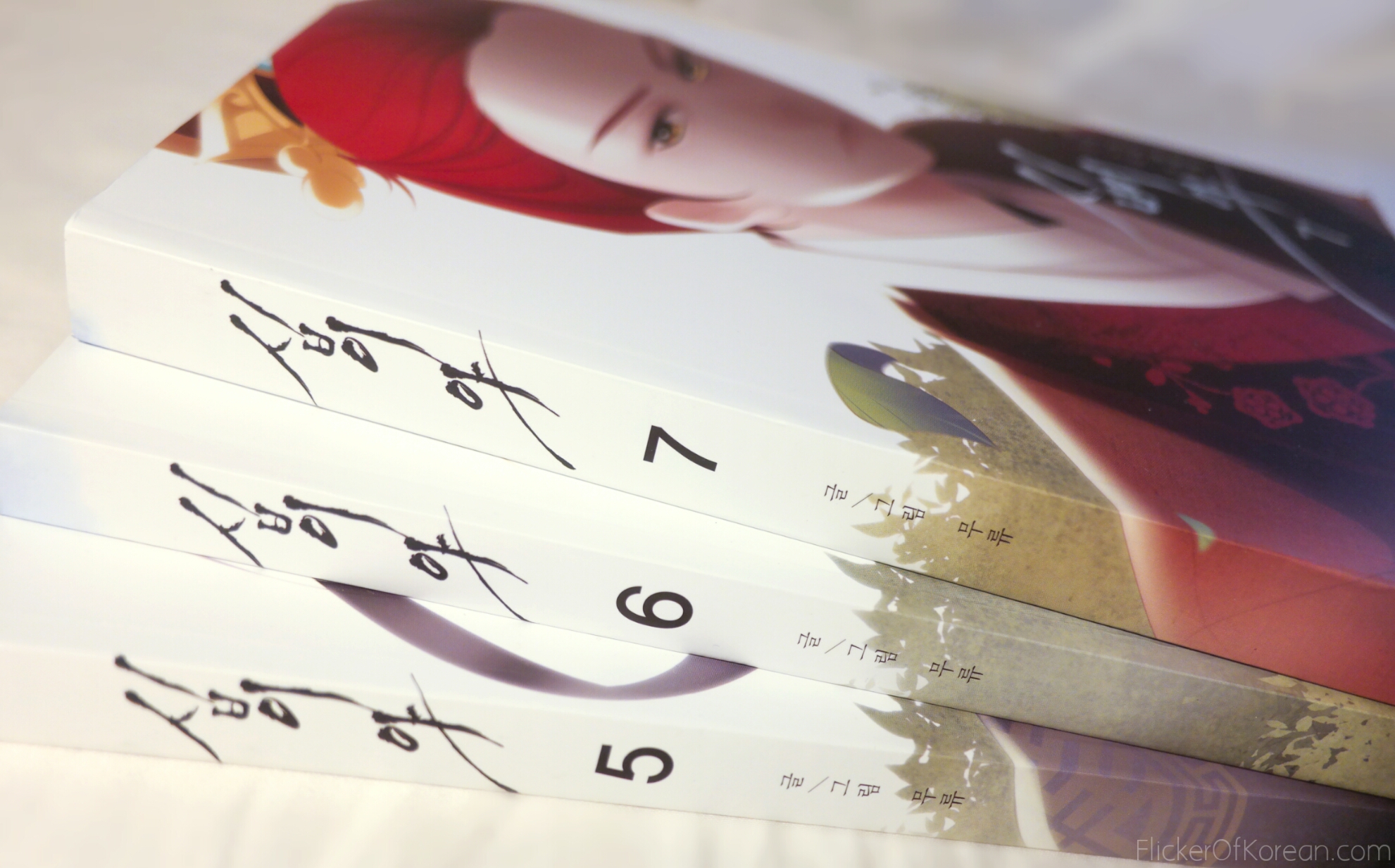 They were so heavy I couldn’t have them shipped all at once and the seller who sold them to me has since disappeared.

After all this I am still unable to read the ending.

Not that I understand anything anyway. It’s a historical webtoon so my usual 10% of comprehension of written Korean falls down to 1%.

I have a Memrise course filling up with words from Twelfth Night I don’t know. I’m only on page 10 and already have over 100 entries in Memrise (did I mention each has over 350 pages?). I have notes scattered everywhere. So many onomatopoeia and mimetic words. I even read about Korean language used in historical Kdramas to get more familiar with all these archaic Korean expressions and verb endings.

But it’s a slow process for someone at my level of Korean.

“Your majesty, dowager queen requests your presence at the bridal selection which will be held tomorrow evening (insert random Hanja here), and this here are official documents which will be discussed with ministers…”

Sometimes I think I just don’t know how to take a hint.

What, there’s a new webtoon by muryu!? I have to go read it! Bye!

P.S. If you have read Twelfth Night leave a comment below. I’m curious if you liked it. I still haven’t read it to the end, so please no spoilers :)

30 thoughts on “My favorite webtoon and my misery”