Is it even possible to practice speaking Korean without native Korean speakers? With the help of technology, of course it is!

Many people who are learning Korean don’t live in Korea and don’t have native speakers to practice with. I’m even worse. Not only do I not know any Koreans who I could talk to, I actually don’t speak to people in my own language either because of my illness, apart from very few people who enter my room to take care of me.

So whether there just aren’t any Koreans living where you are, or you’re an antisocial weirdo, or you’re completely isolated in your bedroom by a serious neurological condition, we have the same problem: we’re learning in silence and have no way to practice speaking Korean…

would be what I’d say if we were living in the 19th century.

Luckily we have technology to replace humans. Yay for us.

This idea came to me while dictating the previous blog post, which is how I always write to prevent my arms from aching when typing lying on my side.

Since then I tried out voice dictation in Korean a few times. My favorite exercise became reading a list of Korean sentences aloud to my device as I was able to quickly compare the original sentence with what I have said. I was pleasantly surprised that my Korean speaking skill was good enough for sentences to match most of the time.

But I already learned something useful too: I pronounce 해서 too close to 했어. I practiced pronouncing each, making sure not to tense my throat for 해서, and I’ve since been able to correct my mistake and get the software to recognize which one I was trying to say. I also had a few instances where 대학교 turned into 때 학교, so I seem to have an occasional problem with tense vs lax consonants.

It was way more useful than I thought it would be.

Joking aside, I think we all know this can’t (yet?) replace humans. For one, communication goes two ways and this is just speaking at your device (there is a way around this actually, scroll down to see). Also, and you probably know this if you have ever used voice recognition in your native language, the software often misinterprets even perfectly enunciated words while on the other hand it randomly guesses incoherent ramblings.

I can only assume the same thing happens in Korean language recognition, but until we can all make contact with real human beings, voice recognition software remains a great substitute.

(or maybe not that great, in that last sentence instead of “a great substitute” voice recognition gave me “agree ChapStick”. Not even close.)

Still, it’s a great way to give yourself a Korean pronunciation test of sorts without feeling embarrassed in front of others.

How to set up Korean speaking practice on your device

Very simply: set your keyboard to use voice recognition in Korean. I use Android and you can see the steps of setting up voice recognition to recognize Korean language in the picture at the beginning of this post. I’m sure it’s not much more difficult in Windows and iOS.

If you can’t get your keyboard to do this, you can always open Google Translate app

I was trying to say Luna입니다 but since 루나 is not a Korean word it kept changing it to 누나. Humans 1 : Technology 0. 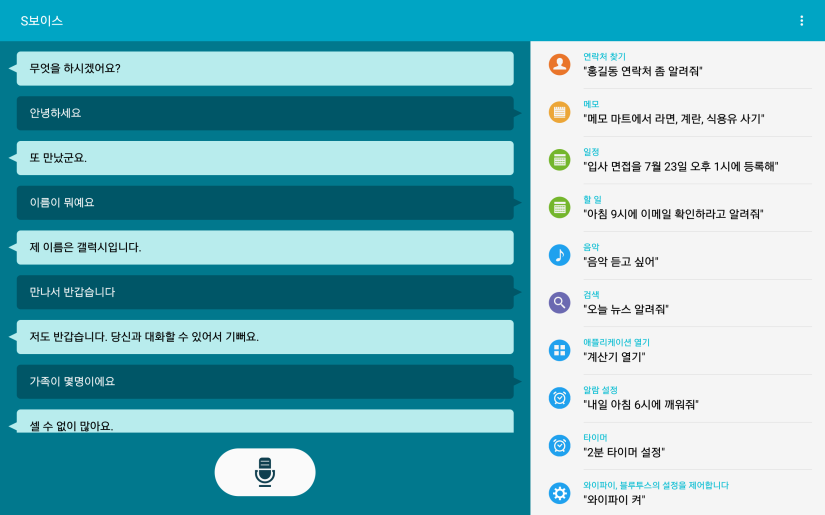 This is Korean conversation practice I had with Galaxy (she told me her name is 갤럭시, the software is called S Voice). Light green is Galaxy speaking, dark green is me.

I think it’s great but as a beginner, some of her answers went way over my head, especially because she seems quite sassy. Still, for the first time since I started learning Korean, I had to come up with my own sentences, remember which particles to use, how to pronounce it and say it quickly enough so the software doesn’t turn the microphone off because of the awkward silence. And I did get the general gist of all of her answers.

Please let me know if Siri, Cortana,and others also have Korean options on your device.

Even though the software can mess up sometimes, if you just can’t get the Korean sentence correctly it might not be the software’s fault. Korean pronunciation changes can get quite tricky. Even if you know how to pronounce a specific word it might be pronounced differently once it’s in a sentence. I wrote last time about three tools you can use to figure out correct Korean pronunciation. They would come in very handy in this situation for speaking practice.